The delicacy and durability of the natural world

“The tree which moves some to tears of joy is in the eyes of others only a green thing that stands in the way. Some see Nature all ridicule and deformity…and some scarce see Nature at all. But to the eyes of a man of Imagination, Nature is Imagination itself.”
–William Blake 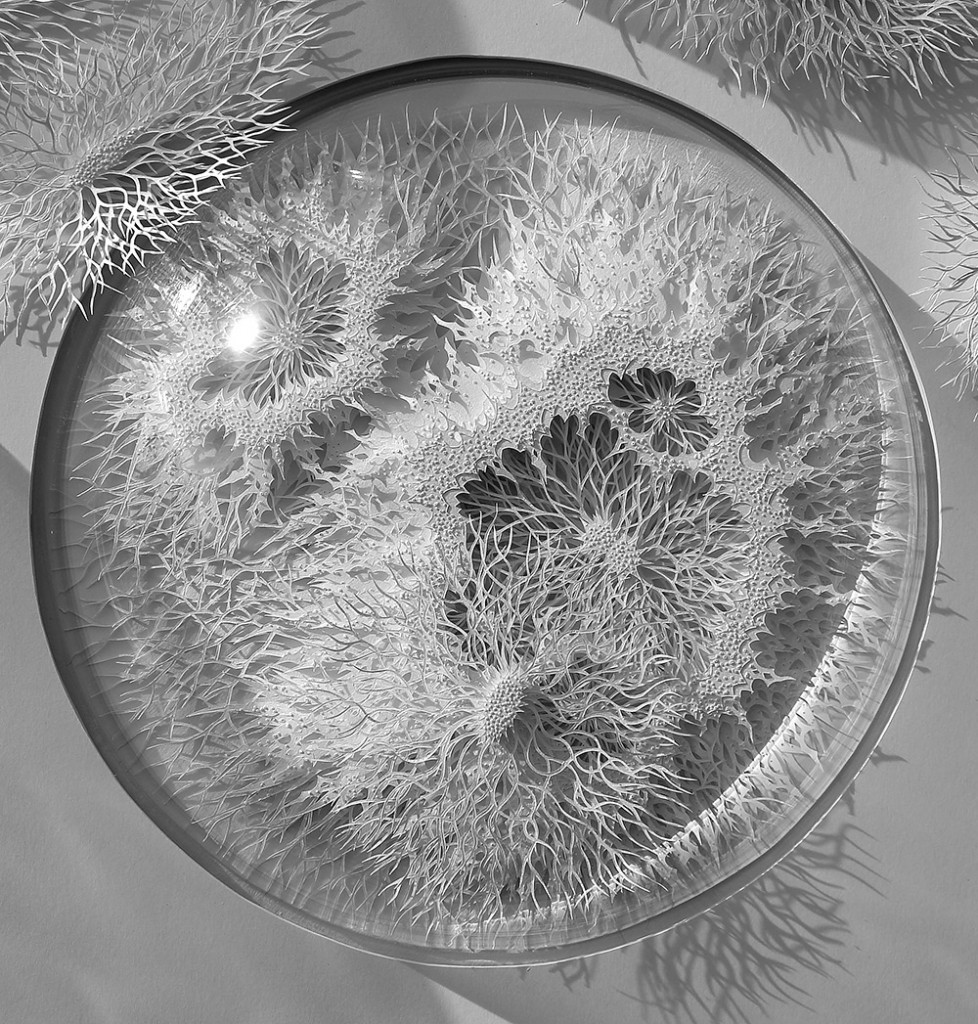 A first glance at the portfolio of artist Rogan Brown reveals petri dishes full of monochrome growth, what appear to be sections of organ-like flowers, weather patterns, geographical reliefs, or possibly the frozen veins in a human body; everything in crisp, immaculate paper.

Rogan Brown took his first steps as a paper sculptor when he moved from London’s teeming metropolis to a national park in France. There, he endeavoured to engage with the nature he found himself immersed in. According to the artist, the choice for working with paper emerged from a decision to avoid the weight of history and tradition associated with painting or photography. After drawing detailed fragments of the textures and patterns he discovered on his walks in the forest, he noticed links between his work and the long standing tradition of scientific observation and illustration, and bought a microscope to explore this further. The slow, meticulous process of cutting paper reflects the processes his objects of study underwent to become as they are. The crisp white paper allows for a complex shadow play to highlight the intricate forms. Regarding his choice of material, Brown explains that, for him, paper “emphasises the delicacy and durability of the natural world.” But there is also a practical reason: “It mixes this incredible level of fragility with toughness.” but adds: “Which, I came to understand, is a perfect metaphor for nature itself.” Brown starts a sculpture by cutting a layer at the middle, and from there the other layers develop. 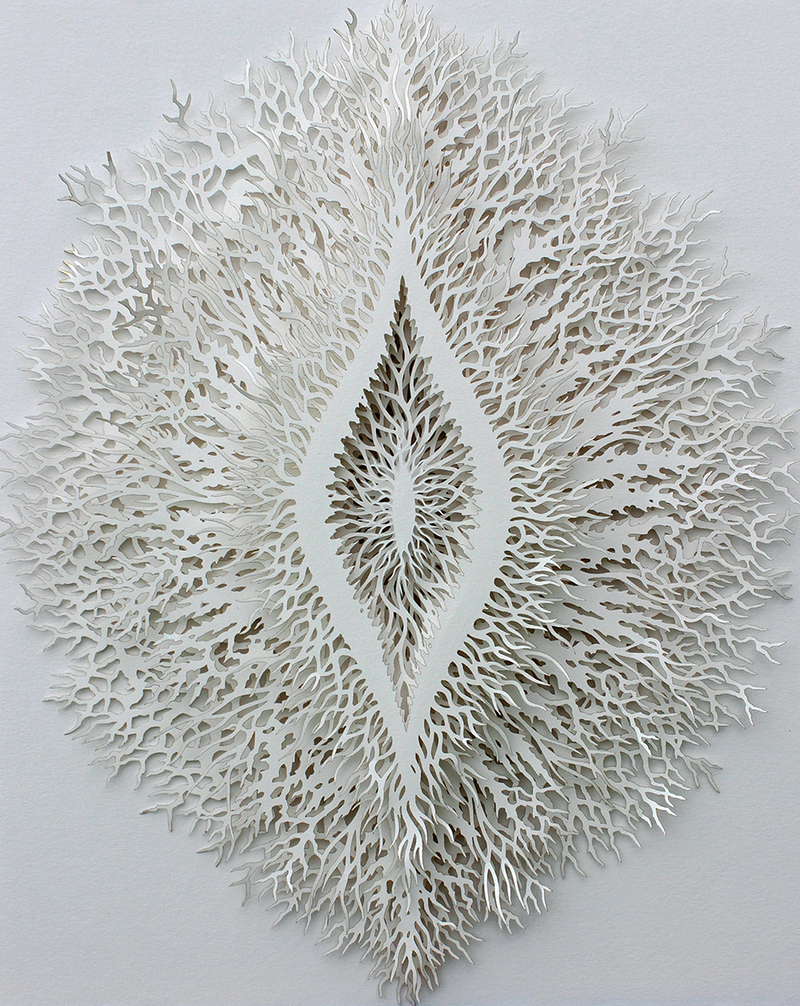 Brown concedes there is a difference in implication between the hand- and laser-cut work he produces, but offers a practical view: “The hand-cut work is so labor-intensive and time-consuming that it makes no commercial sense at all. It doesn’t merely subvert the time-money nexus; it completely torpedoes it.” In order to survive, it is necessary to produce work that is accessible for purchase. Laser-cut work may lack the human process that make the hand-cut pieces so poignant, yet they make possible Brown’s practice and research. In addition, certain forms are possible when laser-cutting which would be very difficult to achieve by hand.

Rogan Brown sees himself as an “archaeologist of the interface between nature and the imagination,” a creator of “imaginary time fossils.” This link between the natural world and imagination is important to his work, and is seen clearly in the work of the English painter, poet and printmaker William Blake, (author of the quote at the top) who is a major inspiration. So is, perhaps unsurprisingly, the German biologist, naturalist, philosopher, physician, professor and artist Ernst Haeckel, known for his beautiful, fantastic drawings of the natural world. 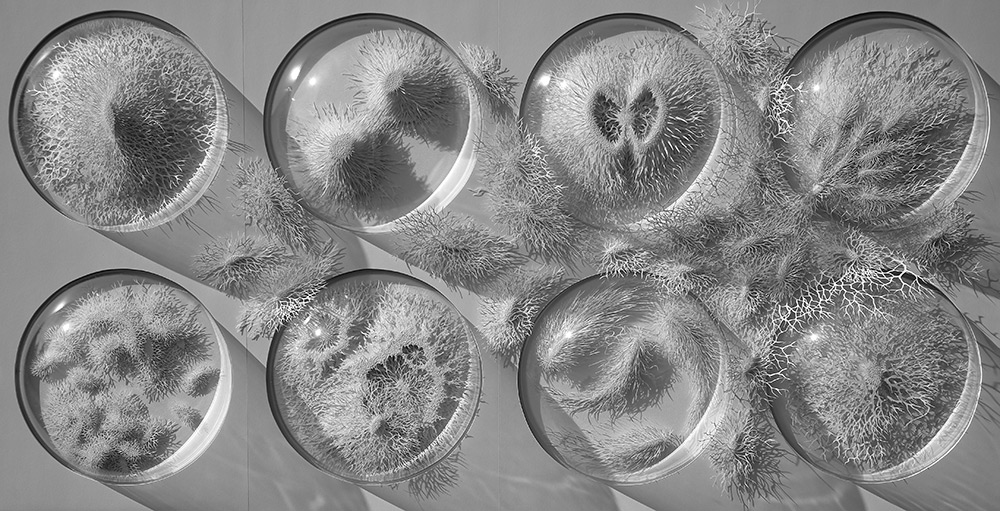 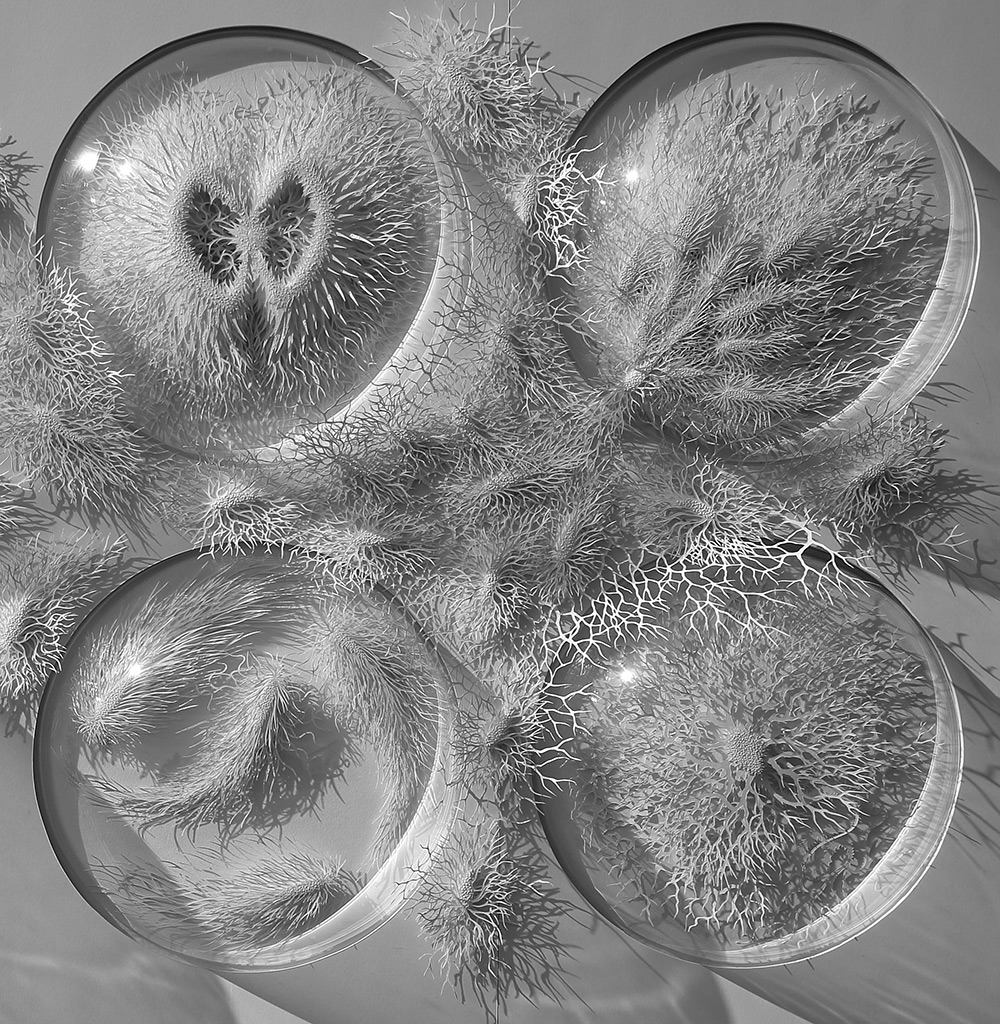 Like Haeckel, Brown seems to operate on the boundaries between art and science. Similarly to paper engineer Matt Shlian, whom we featured previously, this position has won Brown the opportunity to contribute to the understanding of both worlds. His most recent work Outbreak contains a direct reference to the tendency microbes under study have to sometimes “escape” from their laboratories. The work, which took more than four months to produce, is based on the smallest structures found within the human body: cells, microbes, pathogens, and neurons. Breaking free from a grid of eight regular petri dishes is a complex, dynamic, but delicate, interplay of imagined structures. The project was commissioned by the Eden Project, a non-profit organisation promoting eco-tourism and research. “For me as a visual artist the job was to help change public perception of bacteria from something negative and dirty to something that is by and large benign if not crucial for the healthy functioning of our bodies,” Brown says. 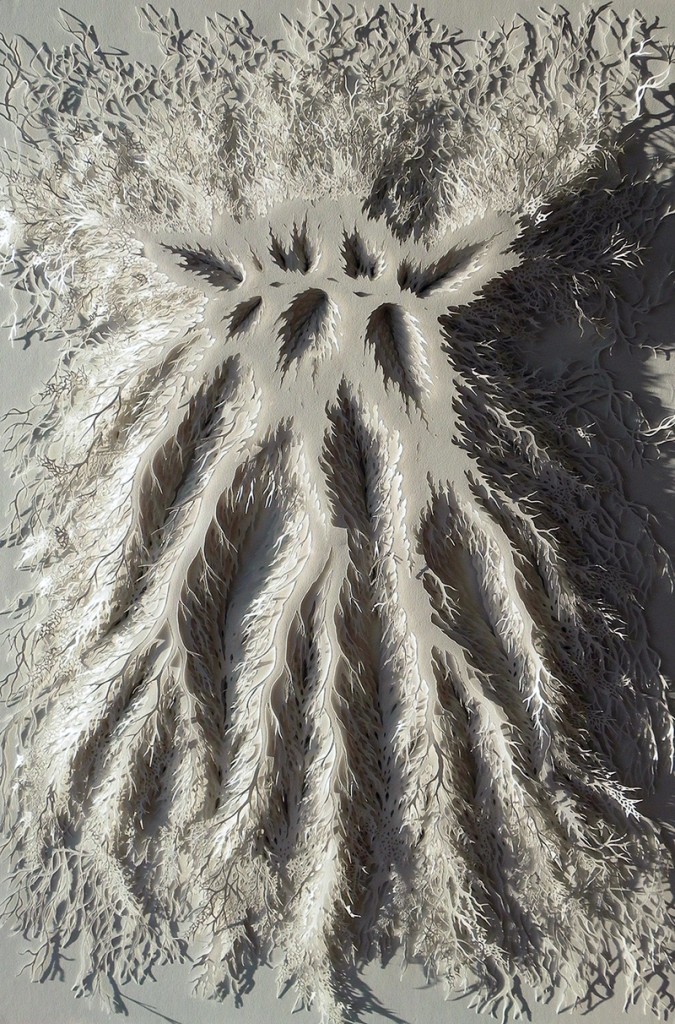 Rogan Brown approaches the art world from studies in literature and cultural theory, rather than art school. Even though  he is not quite an “outsider artist,” there is something unapologetically beautiful and literary about his work and the way he discusses it, which feels refreshing. Paper work, by nature, often falls squarely into the field of “craft,” or at least “construction.” It is projects like Brown’s, which operate in the grey areas between art, craft, science and illustration, that prove there is something about paper as a medium that is (still) very useful to all those fields.