Quilling, the art of rolling and shaping bits of paper into (sometimes very) elaborate designs, exists somewhere in between the two- and the three-dimensional (2.5-D, perhaps?). Quillers, the practitioners of quilling, make use of ten or so basic shapes of either coils or spirals, made from thin strips of paper. 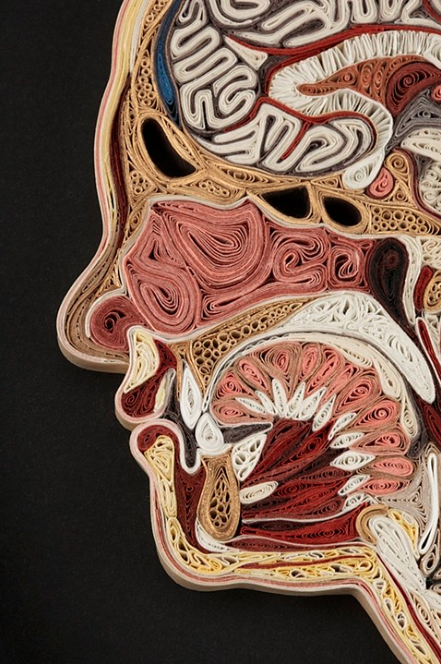 I remember when I was little and in primary school, girls in my class would make the tiny coiled paper teardrop shapes and I was fascinated by the intricate little objects. Later, I must admit, I came to think of quilling as not much more interesting than a technique to make especially sweet postcards. When you have seen one pretty, delicate paper flower petal, I thought, you have seen the whole bouquet. Of course, it turns out, I was wrong. quilling has a long and interesting history, and an at-least-as-interesting present.

Fortunately for me, for nearly every kind-of-neat technique that appears exhausted or uninteresting, there will be someone able to show you it in a new light. In this case I am talking about Lisa Nilsson and her Tissue Series. 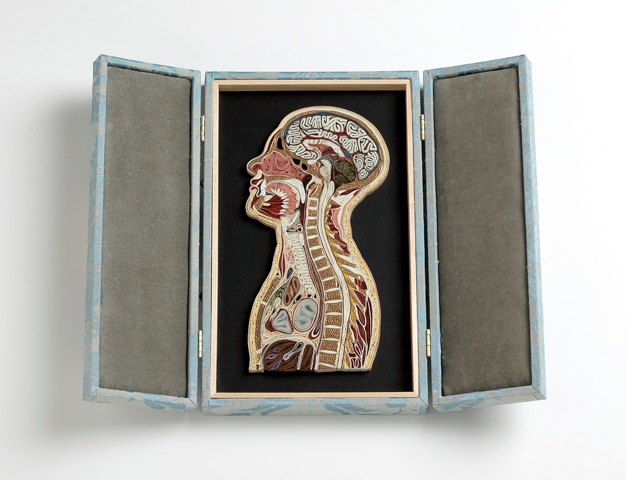 From a distance, Nilsson’s illustrations look like pleasingly intricate drawings mounted against black backdrops in well-made boxes. Closer up, the little rolls of quilled paper become visible and it’s easy to become lost tracing the maze of myriad coils and furrows. The objects in the Tissue Series are based on anatomical drawings: half a face and upper torso, what look like brain scans, as well as cross sections of various body parts. Visually they remind not only of “real” anatomical drawings, but also of “real” preserved scientific specimens. There are also reminiscent old Japanese woodcuts. 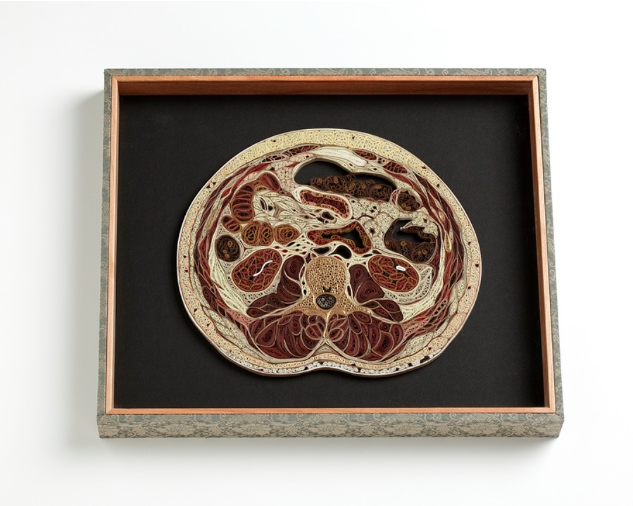 Nilsson trained as an illustrator at the Rhode Island school of Design. She had already started making boxes for her illustration work before she became a paper quiller, when those boxes became receptacles for her delicate objects. She uses any tool she can find for rolling the of strips of paper, such as pins, needles, dowels and drill bits. Nilsson even experimented with 8mm film editing equipment to roll the longest strips of more than 6 metres. Of her discovery of quilling as a technique she says she “had been aware of quilling growing up in the 70s, but hadn’t considered it as part of my art making vocabulary until seeing a religious reliquary in an antique store.” Apparently, according to the Wikipedia page for quilling, it was common during the Renaissance for French and Italian nuns and monks to quill decorations for book covers and religious items. Reliquaries are the receptacles for relics, physical remains of venerated persons which are an important aspect of many religions. The paper used for decorating these reliquaries often came from offcuts of gilded books, which makes it a pretty cool form of recycling.

Nilsson’s work definitely retains a strong connection with the antique objects that started her interest. This is particularly visible in some of her later work, where she combines religious symbolism, such as halos, with anatomical elements. A work in the same series shows a dissection of hands in a praying position, abstract and illustrative at the same time. 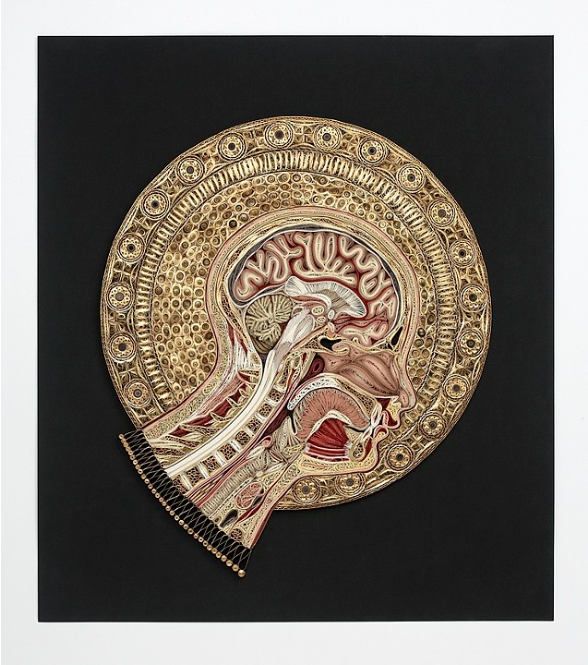 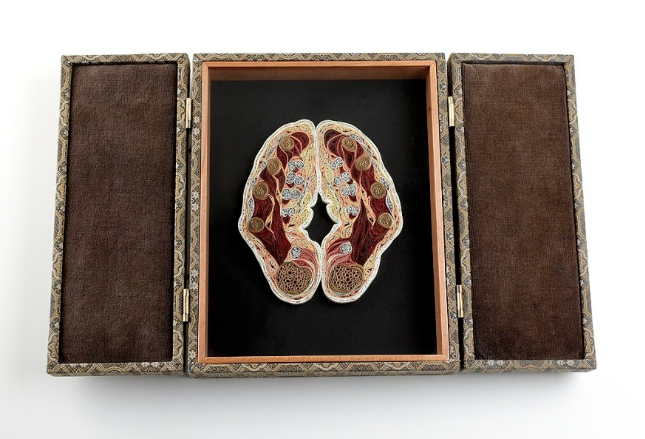 Another direct reference to her Renaissance inspiration is Nilsson’s use of gilt paper. She uses some old book offcuts, although with age, paper eventually becomes too brittle to crimp. And so most of the gold in her work is newly made by a bookbinder in Chicago. The rest of the rolls are made from mulberry paper, cut by hand to the desired width. The paper mulberry is one of the traditional sources of fibre for Washi (Japanese paper), and the earthy colours of her chosen material work beautifully with her subject matter.

“I like to work with Japanese mulberry paper for its strength, flexibility, and the colors available, but that means cutting the strips myself.”

It is interesting to see how how the technique of quilling itself functions with the anatomical subject matter. The rolled and crimped paper strips both mirror the actual biological structures of the body, and add something else to its shapes. On the one hand, you could imagine the intricate 3D anatomy being closer to human bodies than the drawings are on which they are based; perhaps they are a new form of visualisation? On the other hand, they feel almost like too-lovely blueprints for those real bodies themselves. This gives them a sort of sci-fi quality, next to that of an old handmade embroidery, woodcut or quilt. Is it just me, or could they be specimens from a fractal world of almost-symmetrical paper coils? (One where we have bird-bones and are light enough to fly) You would almost believe that one day, sufficiently out of context, the quillings might become relics themselves. They would at least be better suited for that purpose than human bodies are. 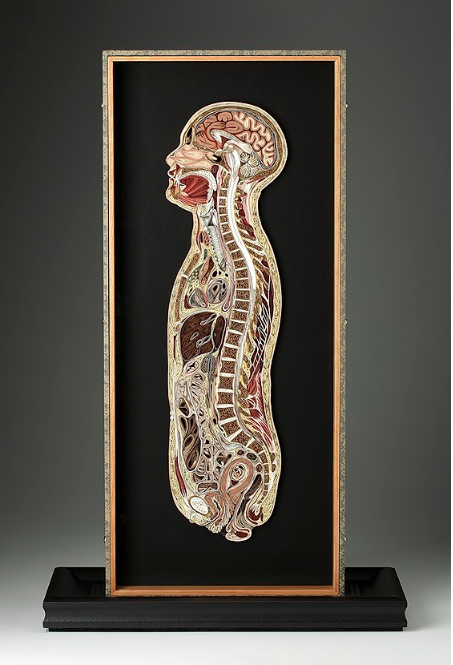 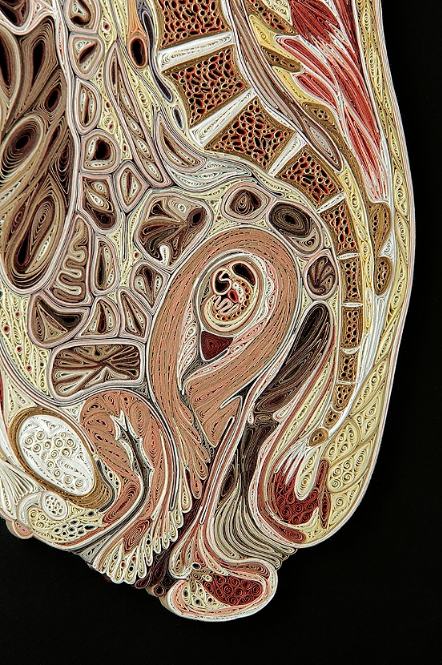 So, not only does quilling live between the 2- and the 3D world. It is also capable of drawing in craft with religion and science. It looks both sci-fi and traditional, and you can do it with washi paper. What’s not to like? Looking at Lisa Nilsson’s work has definitely stirred up the technique’s somewhat dated associations in my mind. I enjoy imagining her Tissue and Angelico series in different contexts, (a catholic church, an anatomy lesson) or put to different uses (order a “relic” of your own body, used as a blueprint for a prosthetic limb), wondering if they can be made to go even further beyond being beautiful, interesting, objects alone. At least, as you can tell, they definitely spark my imagination of a sci-fi future. If you like these elaborate yet somewhat grim objects you might be interested in Nilsson’s TED talk below.

Lisa Nilsson has since moved to a different subject matter, quilling mostly tapestries. I feel these carry different associations and draw more attention to the technique and process of quilling itself. They also seem to have become even more intricate than the anatomical series and, interestingly, with them, Nilsson becomes even more like a highly autonomic, specialised, paper-craftsperson than what I would imagine when you say “illustrator.” 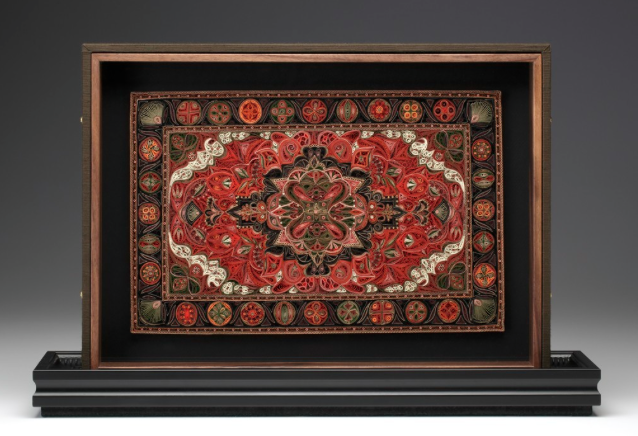 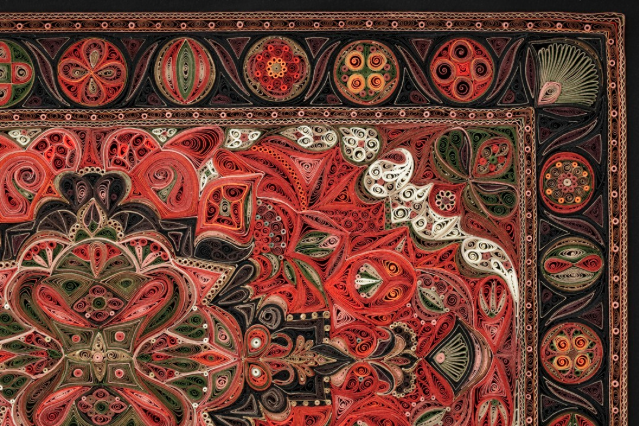 1,2 interviews with Lisa Nilsson on Allthingspaper.