Printing with lead and wood type at Nomad Letterpress

The crisp impression of metal type delicately pressed into textured paper is one of the most powerful weapons in a letterpress printers’ armoury, showing off that elusive third dimension entirely lacking in computer derived printing. Letterpress is enjoying a resurgence with a younger generation who have grown up designing in front of the Mac and though requiring extreme discipline, printing with lead and wood type offers enormous and unique creative possibilities. 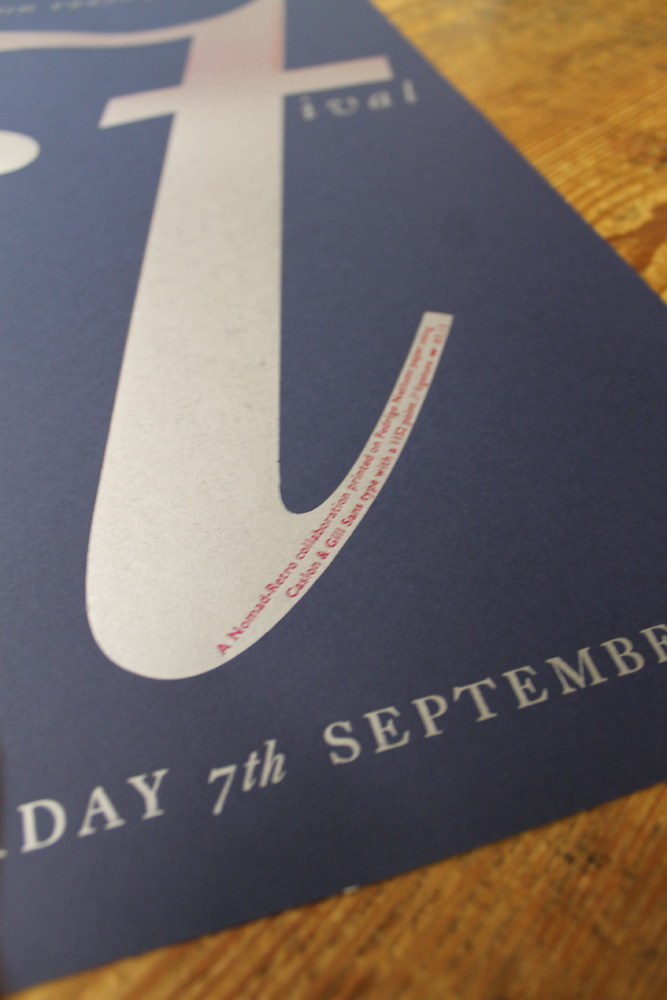 The first Saturday of September each year Normand Letterpress has an open day, aka Presstival, where we get the presses & Monotype casters up and running, and ask other printers, book binders, wood-engravers and paper marblers to have a table and exhibit their work outside. 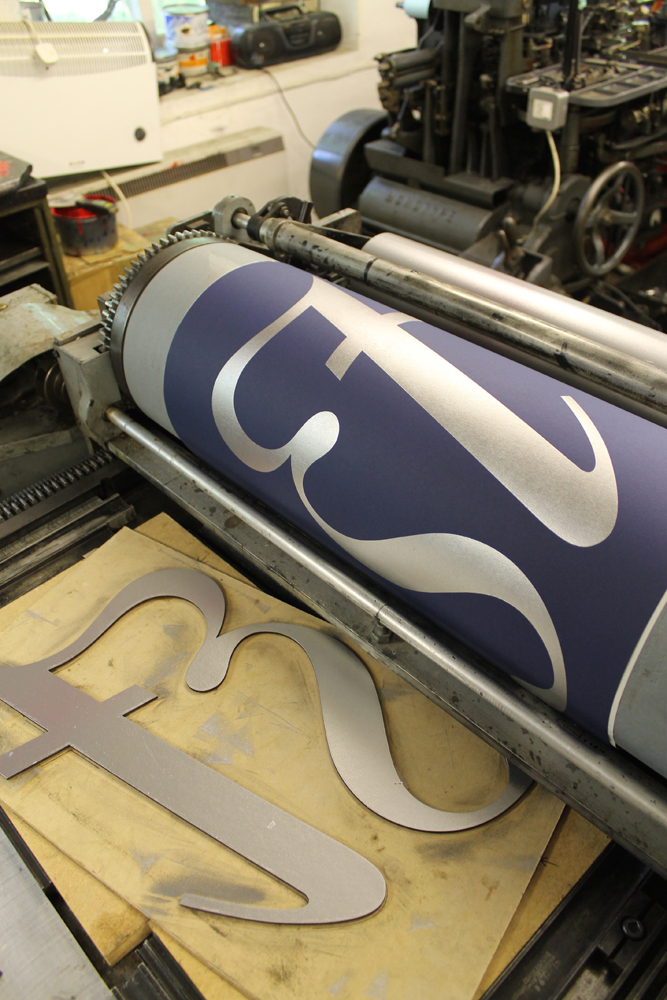 This poster advertises last years event and is printed onto Fedrigoni Nettuno which has a coarse, ribbed surface. The enlarged 1100-point st ligature has been cut with a laser cutter, a tool which offers a cheap alternative to increasingly hard to find wood type as well as the flexibility to manipulate letterforms to any required size. The resulting piece of 3mm hardboard is simply mounted to type height after which it can be run through the press. 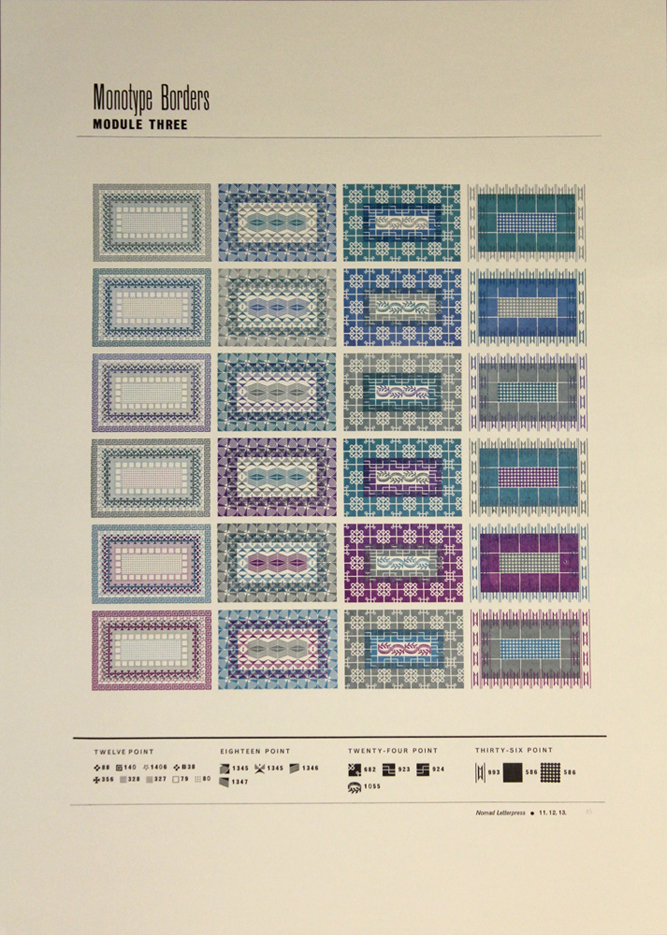 The Monotype Borders series of posters have been printed on to a Zerkall mould-made paper which we tend to use frequently as it takes letterpress so well. The design has been created using 12-, 18-, 24- & 36-point Monotype border units arranged in to 4 columns of 6 with no preconceived idea other than to experiment with pattern designs. I have a fascination with Monotype borders, many of which were designed and cut in the 1920’s and 1930’s and used by printers such as the Curwen Press. After printing each colour run the bottom row of each column was moved to the top with the remaining 5 dropping down into place – a process that was repeated 3 times. I used a split duct when inking which avoids flat colour and means that no two prints are ever exactly the same as the two colours at either end of the oscillating roller battle for superiority. 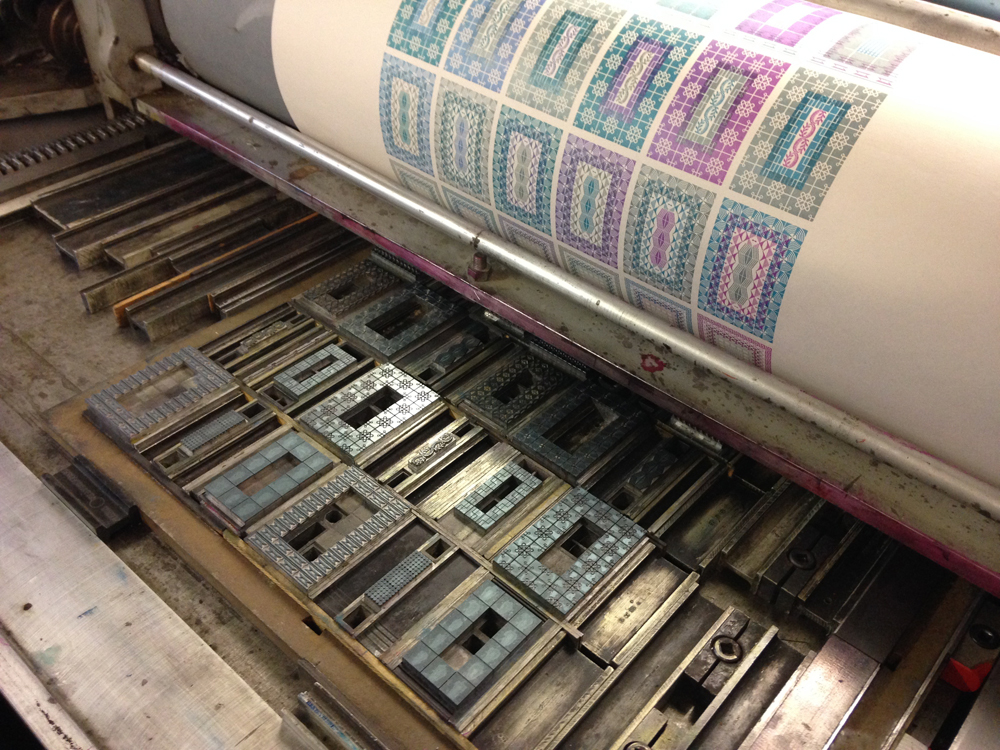 Making of The Monotype Borders series of posters by Nomad Letterpress 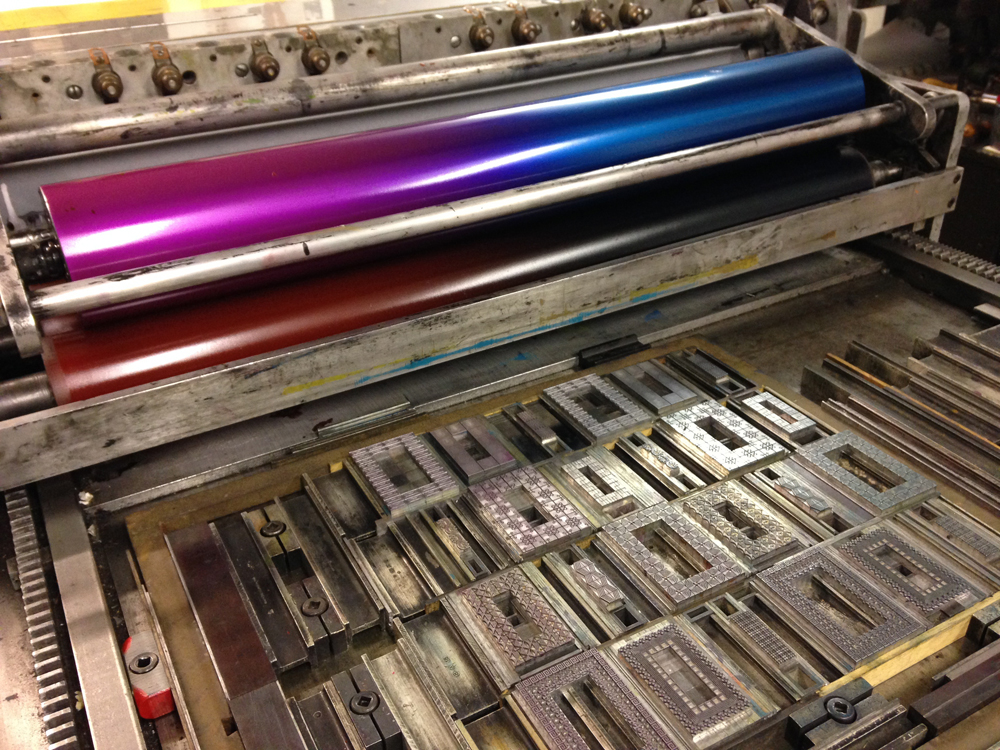 Making of The Monotype Borders series of posters by Nomad Letterpress

In July this year we welcomed to Whittington 13 students from the University of West Hungary in Sopron who during their time here produced a 16pp book with each student responsible for the composition and printing of a single page. 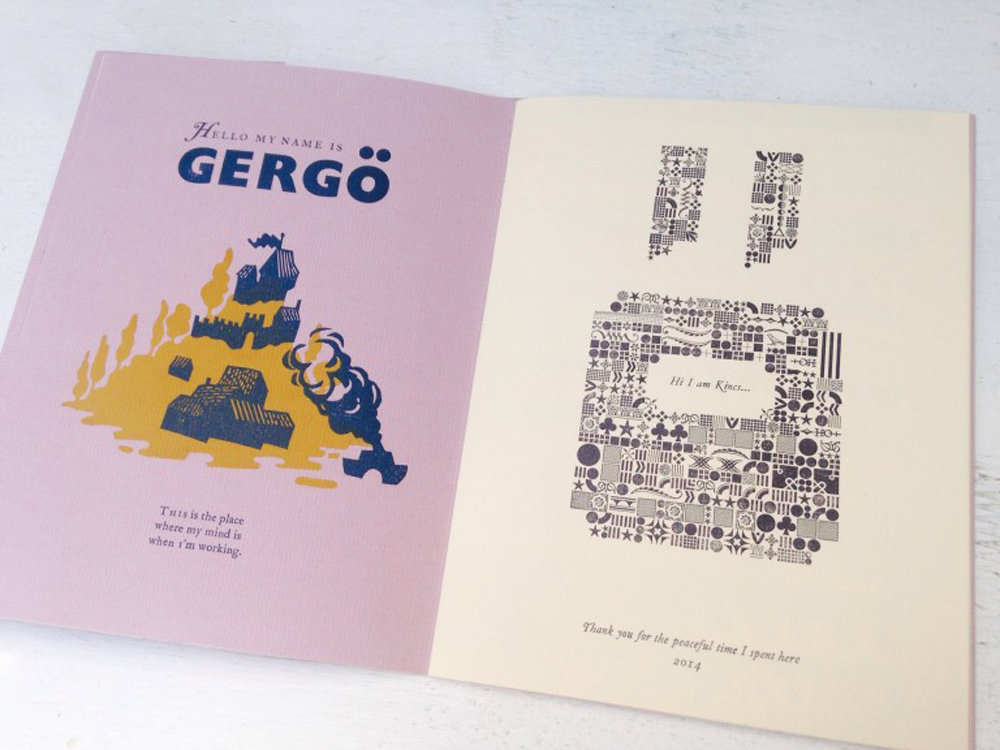 The book, titled SZIA, is printed on to a mixture of Matrix Fine Laid & Bugra Butten papers. Matrix Fine Laid, available from John Purcell Paper, is made for the Press by the James Cropper Mill in Cumbria and is the paper used for printing Matrix, our yearly journal on typography and printing (we are about to start printing Number 33). The students used linocuts alongside wood and metal type and whilst experimenting in a playful way with a new medium, they went home with working knowledge of how to produce a book from scratch using Gutenberg’s technology. 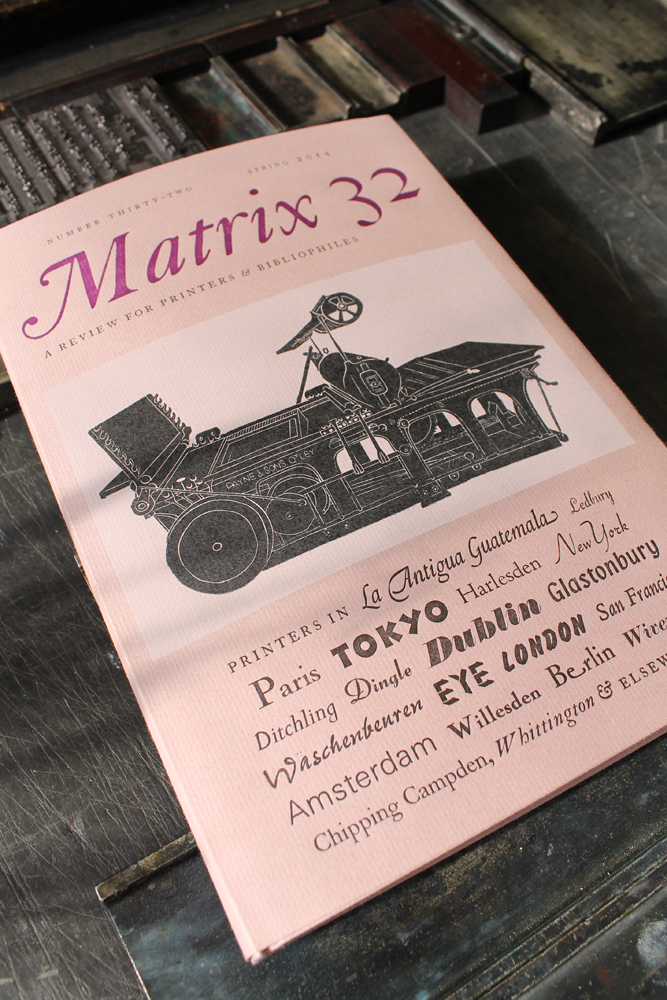 For the last two years I have been running the Heidelberg SB Cylinder at the Glastonbury Free Press. The press rests on a concrete plinth in a comparatively large tent at the circus arena and attracts masses of people intrigued by the sounds and smells of the press room. This year we printed two editions of the festival newspaper in runs of 25k on to a cream 70gsm newsprint from the Anjala Mill in Finland. Beforehand I printed an edition of 1500 ‘G’ posters in to non-bleached sugar paper. 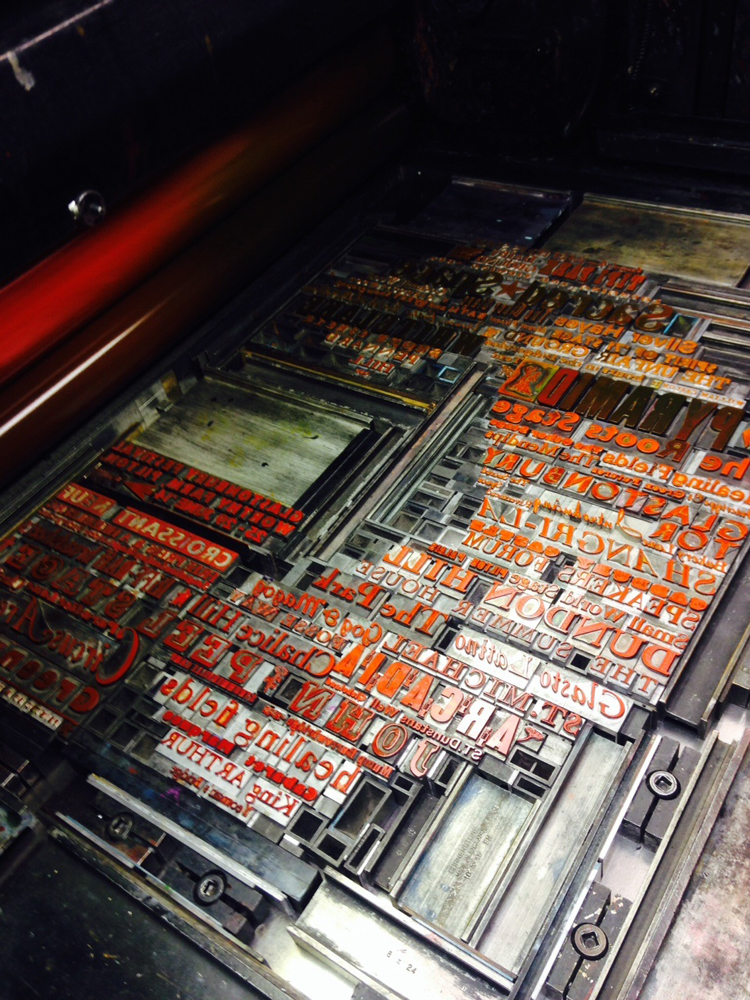 Detail of making of poster ‘G’ by Nomad Letterpress

G was printed on the Heidelberg SBB we have here at Whittington – a slightly larger version than the one at Glastonbury – and I used as many of the unusual typefaces we have as was possible. In addition to the paper and posters myself and a selection of other letterpress printers including Nick Loaring from the Print Project transported some of our own wood and metal type and a couple of Farley proofing presses, enabling us to hold workshops when the Heidelberg was at rest. 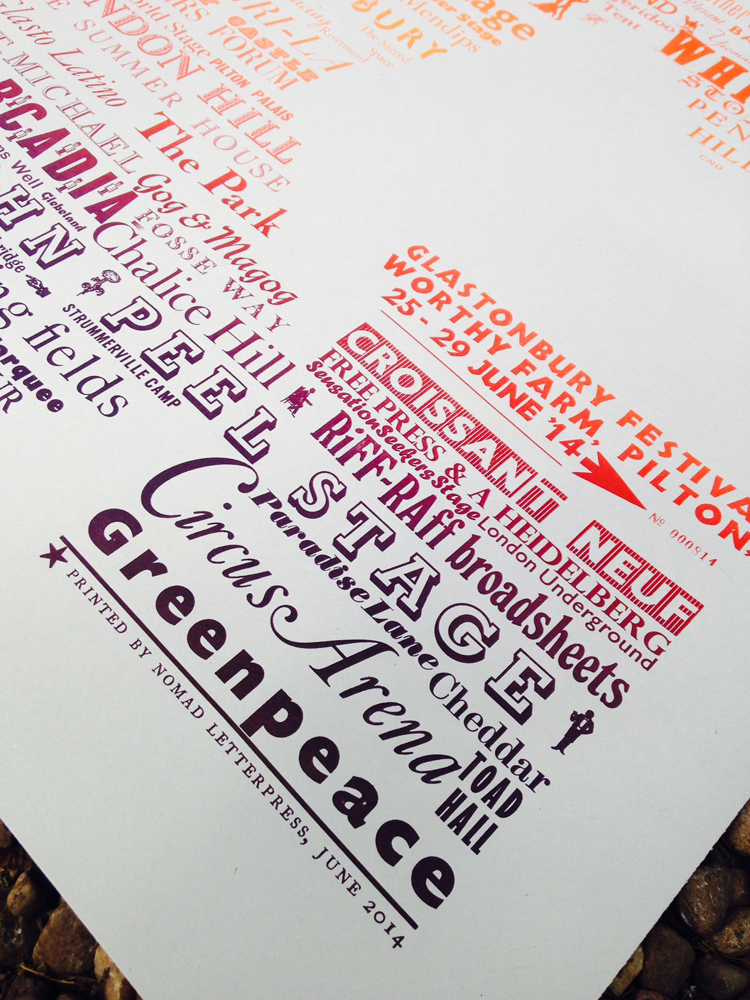 Whilst to some it’s tricky to justify the benefits of printing from lead, a process that’s demanding to master, sluggish and will leave you looking and smelling like a petrol pump attendant, for others there is something addictive there – an obsession – and paper is that vital but silent ingredient which helps to make sense of it all.