Letterpress Workers (LPW) is a collective experience for people involved in letterpress design. For 4/5 days they work together on a common project, print and share knowledge. The idea is to have a real place where people could meet and get to know each other in order to create a network useful for everyone.

It all begun in 2012 when we, Officina Tipografica Novepunti, started working with Archivio Sacchi on an event during the Milan Design Week. Archivio Sacchi is an important design museum located in Sesto San Giovanni, a town just outside the city. They said “We will have a collective exhibition of young designers, why don’t you join us and print something?” “Why not call other people and make something together?” we replied.

We started to the collect e-mail addresses and web addresses of everyone we liked. A couple of months later we had a list of 30 people to call but we needed a name, a schedule, everything. The first problem was the name. Idea: Archivio Sacchi is located in a former industrial area, one of the most important in Italy, so why not use the word “worker,” a sort of celebration of “real” work, much like letterpress itself? The name was found. 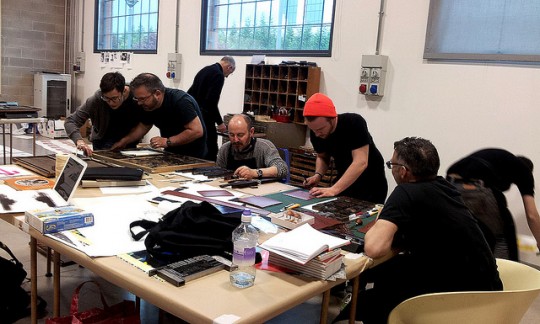 After that we looked for machines and materials.We talked with the Turin Typographic Archive and they just said: “we have four small presses, do you want them all?” We replied “Yes” and they gave them to us. We also contacted Cordenons for the paper and they became our technical sponsor. They gave us Canaletto 125gr, a good, FSC certified, white paper. From our workshop we moved a chest with metal and wood types, inks and other necessary items. 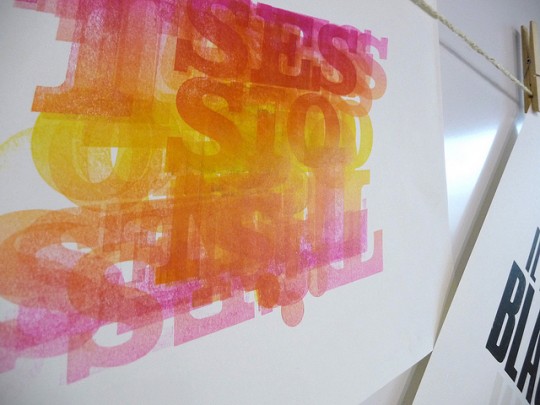 Then we made the call, with an approximative schedule. Somedays later, people started replying and six people said yes! They are the pioneers: Thomas Gravemaker (NL), Alex Cooper and Rose Gridneff (UK), Pete Burke (DK), John Cristopher (UK) and Mark Pavey (UK). We also called some italian letterpress designers to make a print for the final exhibition: Anonima Impressori, &type, Cabaret Typographie, Pirouette Press and Lucio Passerini sent their works. The italian part of the LPW was ready. 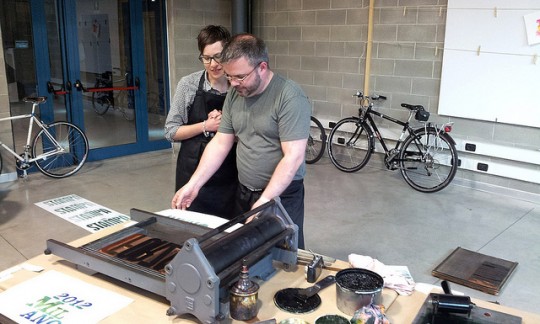 In the morning of April 12, people arrived and starter printing as soon as they dropped their luggage. The session was organized as an indoor camping, using some space at Archivio Sacchi as accommodation and the inside restaurant for breakfast and dinner. “Living together” was great, people had the oportunity to meet others they previously knew only on the web, started friendships and collaborations. Our godfather Thomas Gravemaker demonstrated lots of tricks and John Cristopher carved a piece of marble with the word Lavoro (work) with his small hammers. Visitors started getting involved and printing themselves. 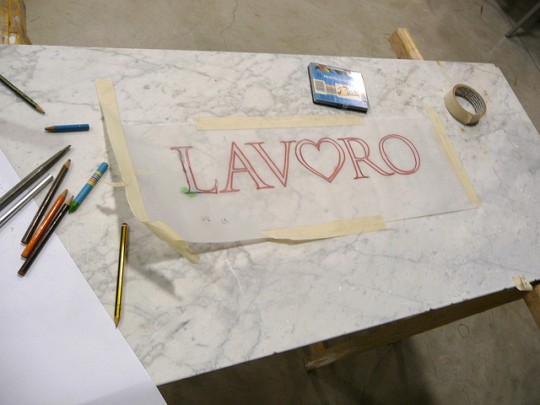 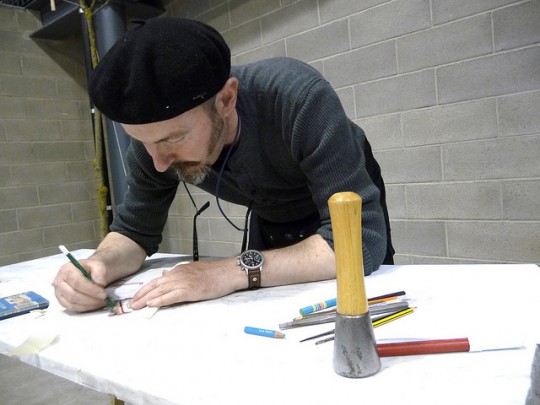 John Cristopher in the process of carving Lavoro

After four days of brainstorming, hard work, nice food and good talks the results were 15 prints in 15 copies each. In the days after Novepunti, with the aid of Magut design (the design studio of Archivio Sacchi), prepared the exhibition and the final conference. That is how the first edition ended.

At the beginning of February we began organizing the second edition. The first decision was to not organize the event during the Milan Design Week. We wanted to attract more visitors, and during Milan Design Week too many events take place in a very short time period. For the same reason we decided to move the event closer to the center. A few months before, a group of artists and craft workers squatted the former city slaughterhouse and created a cultural center called Macao. We asked them about the possibility to host the second edition of LPW there. They were enthusiastic to have us there so we decided to host the second edition of LPW in June. Around the same time a fair for small publishers was organized. It was amazing to have real print work and printed books in one place. 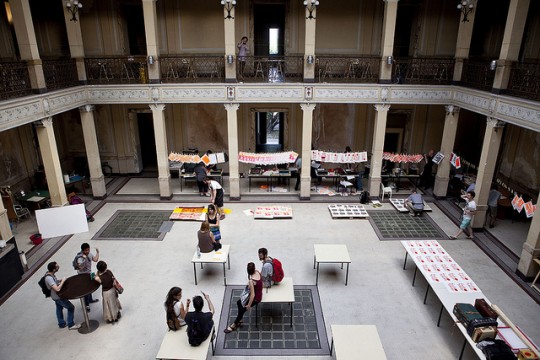 For the second edition we chose a new theme inspired by the place hosting the event. Macao is located in the biggest market area of the city so we decided for “Market,” in its vastest definition. 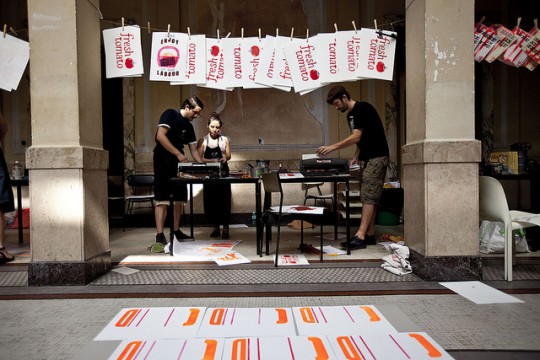 Our initial six pioneers agreed to participate again, and so did ten more people! At last minute Alex and Rose couldn’t come so they put us in touch with their collegue, Christian Granados. It was nice that people called other people and, in the end, we ended up being twenty. The meeting turned out international, as we also had two guests from 40 Dedos in Mexico City. 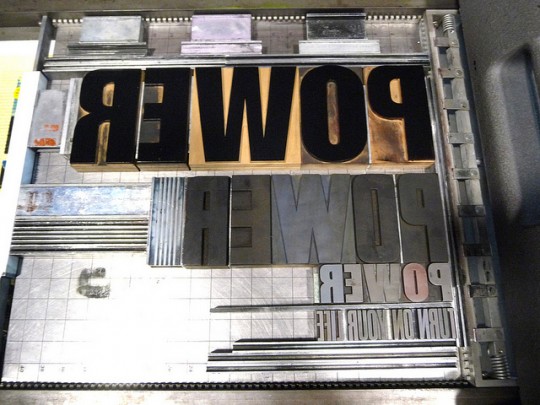 The power of printing at Archivio Sacchi, April 2012

Turin Typographic Archive gave us the four presses again and Cordenons supplied with a new kind of soft and textile paper called Wild. Of course other italian letterpress designers send us their works, and Lucio Passerini as well as the collective &type joined us. We prepared two bedrooms for ten people and a kitchen for breakfast and lunch in Macao. Ten people stayed there and the others in a hotel close to Macao. Everyone arrived on Wednesday, the 16th of June, while we were cleaning the place, and in the evening, we had a welcome party. In the morning, after a small brief, the people from Macao took us on the roof, to show us the area. There was a lot of used commercial paper and we took it for printing!

The presses worked hard, there was ink everywhere and everybody was enjoying the collective work. In the evening we held a public presentation of everyone’s work. The third day coincided with the first one of the publishers’ fair. We started printing on the reused paper we found and the results were incredible, it was like old stories of the place were living again.

How about a book? at Archivio Sacchi, April 2012

In the evening there was another presentation and Yago Bolivar, of Familia Plomez, spoke about SuperVeloz, their modular/illustrative type. During the weekend print work continued. We also organized a visit to Lucio Passerini studio and, last but not least, a big dinner on Saturday night. The event went better than expected and all the participants enjoyed everything. We fulfilled our goal of starting a concrete network, and hope that LPW will became an annual meeting not just in Milan, but also around Europe.