Irving Haper’s footprint on design in the 20th century is best descried by Michael Maharam as “the most famous designer you have never heard of,” in a monograph entitled Irving Harper: Works in Paper published by Skira Rizzoli in February 2013.

An icon of industrial and interior design, Irving Harper is also famous for his exceptionally detailed paper sculptures. Harper himself described paper art as a way of relieving stress of relaxation he discovered during his career as an industrial designer for George Nelson Associates.The house in Rye New York where Harper, now 96, has lived for more than 50 years, is also home to more than 300 paper sculptures, all designed by Harper himself.

“Encompassing influences as diverse as Picasso, Egyptian hieroglyphs, the art of Oceana and Africa, the architecture of Paris, and the American beech tree that shades the Rye, New York home he has lived in for over 50 years, the artist’s private meditations reveal an informed aesthetic consciousness expressing itself as pure joy. Harper’s private work delivers on the promise of modernism: humble materials elevated by brilliant design and craftsmanship, and integrating the natural world to create objects in a universally understood language.” 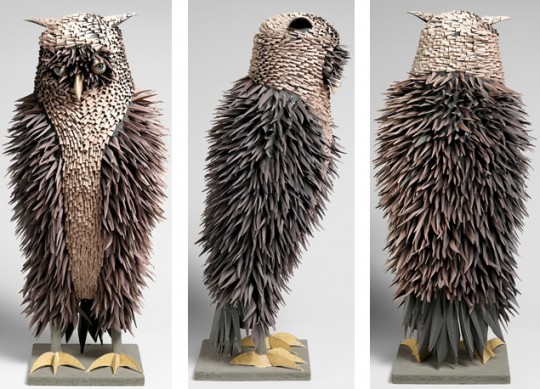 The owl sculpture, also used as the book cover for Irving Harper Works in Paper

Harper has an impressive collection of beautifully crafted works, varying from prototypes for his work as an industrial designer to masks, various animals, such as cats and birds, with which he was fascinated at some point, as Julie Lasky mentioned in Irving Harper: Works in paper. The materials used for these works constitute anything that was lying around; paper, glue, matchsticks, and even his daughter’s dolls, Lasky wrote. One of his last pieces, a huge owl made of paper pieces and matchsticks is adorned with the eyes of a doll. Tracing the inspiration sources of great artists of his time such as Pablo Picasso back to African art, Harper has created a few horses, paper masks and sculptures. 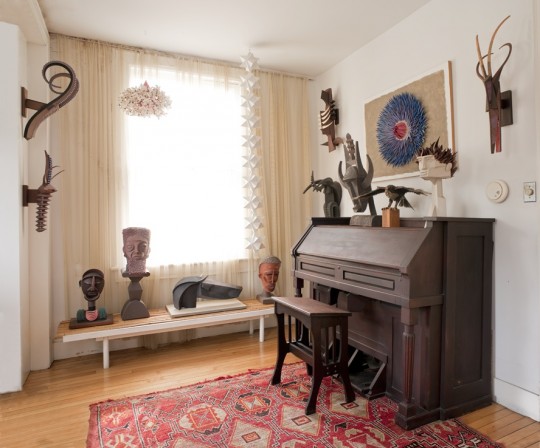 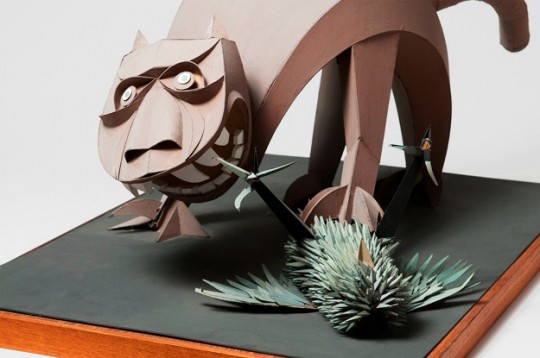 A video series called Why Design realized by Herman Miller includes an interview with Irving Harper about his paper art works in his own home. The video, entitled Paper is a versatile medium is a glimpse into the personality of this modern designer. Harper never sold any of his paper works, because as he says, he wanted to have them around. Harper is no longer making his stunning paper artworks since 2005, when he ran out of space in his home to display them.

“I got the sense from talking to Irving that he was really interested in working these construction problems: How can I twist this, form that, and build that, working with paper?” Lasky wrote. “He created an engineering or an architectural-structural problem to solve within the aesthetics of different forms. Irving Harper’s paper artworks are the results of years of meticulous works, and impress through their beautiful execution and inspiring use of simple materials.