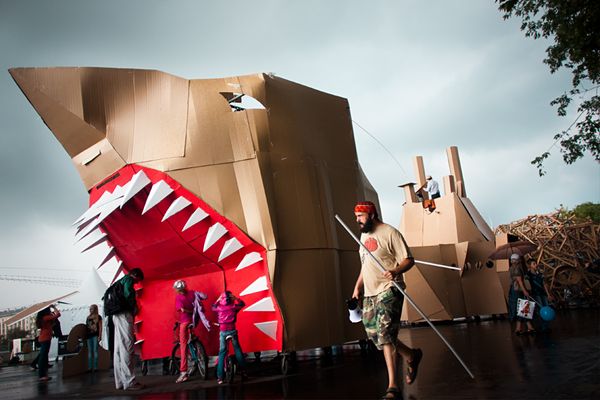 Personages of Cardboardia are happy to welcome anyone who wishes to create big, perform loud and parade the streets of Amersfoort! If you want to learn creating with cardboard or get better at what you already know; if you are looking for a powerful experience, for being a part of a large creative project and making new friends – join Cardboardia at the Lab!

The Lab has two major Modules:
Module 1 – Designing costumes and objects for interactive performances
Module 2 – Street performance and communication with the public for beginners

Throughout the several days of our intensive Lab we will create a large-scale interactive space and prepare a city parade of cardboard awesomeness. In Module 1, designers will learn basic and advanced techniques of creating costumes, decorations and objects from cardboard. The program could be particularly interesting for artists and architects, school teachers and designers.

Those who take part in Module 2 will go through the entire cycle of preparing a city event – adapting the concept to the location, preparation and management. The module is curated by a brilliant street theater director, so we especially welcome stilt walkers and other performing artists to take part. You will learn the basics of interaction with the audiences, exchange stilt walking and performing experience and get to improvise in a new eclectic team.

The Lab will end in a series of performances throughout 28-31 of August
Curators of the Street Performance Lab are: Spyros Andreopoulus (actor, director, stilt performer, founder of Motus Terrae Theatre Company) and Olesya Kandalintseva (artist, designer, workshop curator at Made in Cardboardia).

Participation in the Lab is free, yet the number of participants is limited
Groups will be formed following the results of online interviews. Lab participants will need to take care of their daily expenses and costs of travel and stay in Amersfoort (Netherlands).


By late August of this year, in the low countries of Amersfoort there shall be a Parade of Dreams directed by the Tyran of Cardboardia. The time has come when the Tyran of Cardboardia officially announced the expansion of influence of his phantasies. “We must ensure fertile soil for the fruit of my imagination. This garden shall flourish in every corner of the Earth!” – Tyran commented in an interview. The leader of the nation promised to make available to the blessed public the most exquisite corners of his kingly mind. At his command the craftsmen of Made in Cardboardia built the Dream Machine. The machine emits somnifacient radiation that induces daydreaming in humans. The dreams they start having materialize without fail.