One of the most interesting aspects of my work as a bookbinder is from time to time having to devise a new technique as a solution to a particular problem. And to be fair, I enjoy this so much that sometimes I create my own problems to solve so I can justify a bit of research… 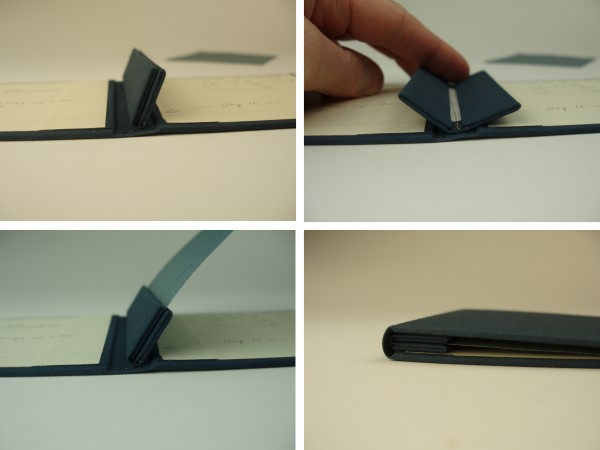 Recently I was approached by a big London hotel company to re-design their menu covers. First step was to produce a series of samples using different mechanisms so they could compare them and ultimately pick one. I have always found that binding screws are not only awkward but also tend to generate a lot of bulk, especially when they have to be invisible. So I came up with a solution using magnets, which works a treat for a small amount of pages, and reduces the bulk to a minimum. They liked it but sadly went for the screws, arguing that with the magnet option, drunk customers might take them apart. Fair enough.

Back in my student years me and a few friends started a creative bookbinding group, with the idea to wander together into the unexplored territories of bookbinding. Our first assignment was: bind a collection of postcards or photographs without gluing them, sewing them or using photo corners, plastic sleeves or any other standard solution. I came up with two solutions, the first one being the ‘Shrigley’ (named after the artist David Shrigley). The principle is a series of paper frames folded in a way that creates four triangles in each corner, in which the cards can be inserted. The clever part is that the back side can be used too, and the frames can be sewn to one another, and to the spine (in this picture, a concertina). 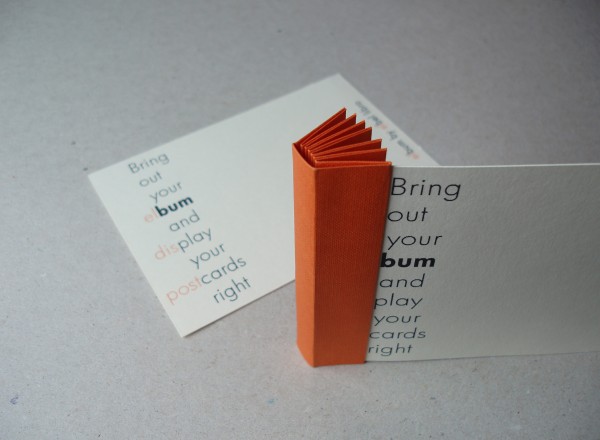 The second solution I came up with is a development of one of Hedi Kyle’s folds. Hedi Kyle is the American living legend of book arts and when I took her class in Ascona, she showed us a very clever closing mechanism on the front board of her ‘blizzard book’. The fold acts as a kind of pocket which receives the back board flap and I got the idea to multiply that fold to create a sort of book spine that can hold pages just by gripping one of their edges. Recently I discovered that I can reverse the outer units to create a spine, so the whole thing is self-contained, made out of one single piece of paper. I call it ‘elbum’ (a lot catchier than ‘multi-pocket concertina structure’) and the next image shows the kind of jokes it can be used for.

There have been many efforts in recent years to improve the opening of books and this is my own personal contribution to the subject. In a few words I would say that it is a mixture of a type of industrial brochure as practiced by (among others) the dutch company Hexspoor + Gary Frost’s sewn board binding + the old fashioned springback binding. What is special about my design is that the spine is made separately from the book (this is what ‘dos rapporté’ refers to) and is attached by gluing its inner part, the one that folds back on itself, onto the boards. This makes for a very fluid opening action as well as an interesting profile and a very clean hinge on the outside, which can also be stitched (second image). 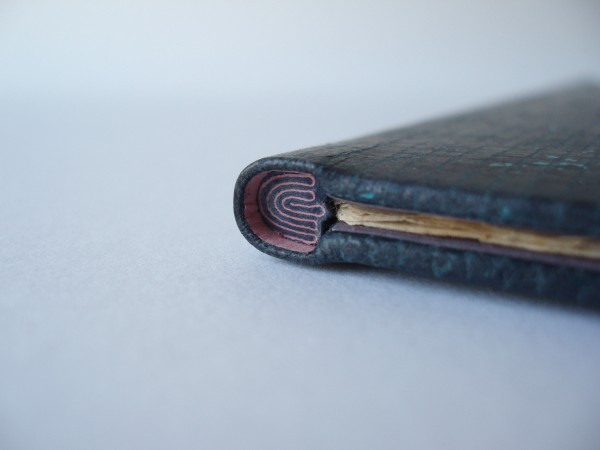 The onion skin binding was born from playing with the idea of guards in photograph albums. I have always found these intriguing and to be a potential design feature. By trying to merge separate guards into a single, continuous one, I ended up with this special pattern. I then adapted it for single section binding (image), and I am currently developing a multi-section variation.